I don’t know how it happened, but my obsession lately has been fountain pens. I’ve always been a bit of a pen nerd—always buying a new pen but never being completely satisfied by any of them.

One year I went to the office supply store with $50 and a plan to buy the best pen I could afford. I remember being disappointed that the pen I ended up liking used a standard Parker refill.

A few weeks ago, I decided to spend some of my birthday money on a new pen. I ended up getting the Zebra F-701 and I’ve been fairly happy with it. The Zebra ball point writes very fine (which I like) if a little too light. But the pen feels pretty good in your hand. It isn’t a stainless steel pen though, it is a plastic pen with a stainless steel wrapping. That makes it fairly light. But it looks good.

The other pen I had my eye on was the Rotring Rapid Pro but I ended up needing a new pair of ear buds so I got those instead. (If you read my last post you’ll probably want to know that I did get another pair of tweaked audio ear buds.)

In all me research to decide what pen I wanted to buy, fountain pens kept popping up. I had tried a cheap Parker fountain pen years ago but was never happy with it. It didn’t write consistently.

Then I was a Walgreens and needed to get something small to get some smaller bills, so I was looking at the Zebra refills for my F-701, and noticed a Zebra V-301 fountain pen for $3.99. I picked it up instead and was intrigued by it. It doesn’t always start consistently, but once it gets going, it seems to write fairly well. (If the pen is writing inconsistently, I found that taking the cartridge out and reinserting it starts the ink flowing again).

Being already in pen research mode, and finding the Zebra fountain pen and being somewhat intrigued by it, I started looking for other starter fountain pens. Man-o-man was I not ready for the onslaught of stuff to waste time reading. There are all kinds of pen reviews and information and shows and what not. It just keeps going and getting deeper.

One pen that kept popping up as a good starter pen was the Lamy Safari. I’ll probably get one at some point, but I didn’t want to spend $30 on a fountain pen yet.

A newer pen that kept coming up what the Pilot Metropolitan. This seems to be a pen that everyone is gushing about as being a great starter fountain pen. It uses Pilot’s ink cartridges, but it also comes with a converter so you can use bottled ink.

At $13 it is pretty inexpensive (for a fountain pen) and it was generally regarded as a great pen. So I bought one. 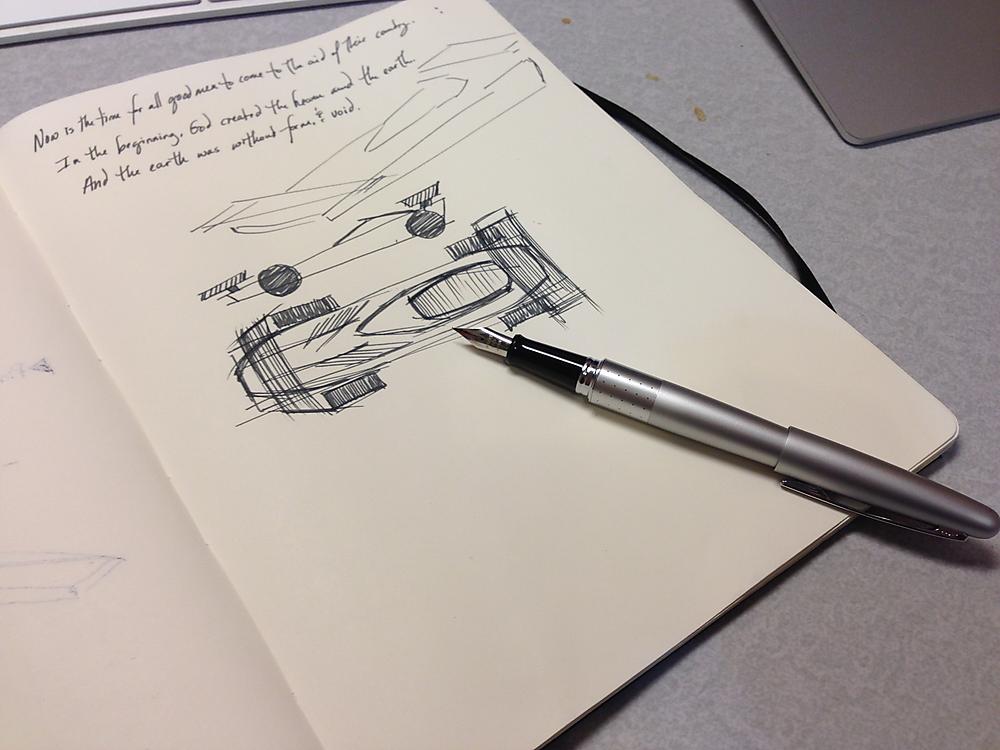 I have to say, that it writes better than most any pen that I’ve ever used. The ink flow is great. It writes every time. It is smooth writing and wonderful to hold. I absolutely love it.

Now, it only comes with a medium nib, and right now it seems to be writing like a broad nib. I tried to adjust the ink flow a bit to get it drier, but I have a feeling I’ve made it worse. I’ve got some Pelikan 4001 brilliant black ink coming today that may make it a little better. I also have a feeling that I might need to clean it.

And that is the thing about fountain pens that has really gotten ahold of me. When you buy a pen like a fine point gel roller from Japan, you get what you get. There is nothing you can do about it. You either like it or you dont. But with a fountain pen, there are so many variables that you can play with. You can switch inks and see if a different one works better for you. You can even send your pen to a “nib meister” and have it ground down to a finer point. Or changed to an italic stub.

So I have a feeling I’m hooked now. We’ll see where it goes.

A word to the wise, don't try doing a nib or flow adjustment on your first and only fountain pen. If you follow the advise of some sites and try to bend the feed to slow down the flow of ink, it is entirely possible that you will break the feed in two. Practice on a pen that you aren't using every day.